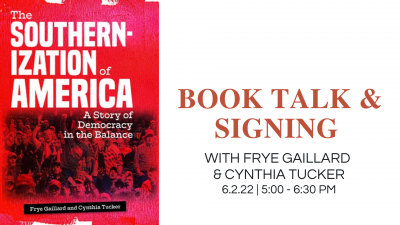 Join us Thursday, June 2 from 5-6:30 PM for an in-person talk and signing, welcoming Frye Gaillard and Cynthia Tucker, discussing and celebrating their latest release: The Southernization of America.

In 1974 John Egerton published his seminal work, The Americanization of Dixie. Pulitzer Prize-winner Cynthia Tucker and award-winning author Frye Gaillard carry Egerton’s thesis forward in The Southernization of America, a compelling series of linked essays considering the role of the South in shaping America’s current political and cultural landscape. They dive deeper, examining the morphing of the Southern strategy of Richard Nixon and Ronald Reagan into the Republican Party of today, the racial backlash against President Obama, family separation on our southern border, the rise of the Christian right, the white supremacist riots in Charlottesville, the death of George Floyd, and the attack on our nation’s capitol. They find hope in the South too, a legacy rooted in the civil rights years that might ultimately lead the nation on the path to redemption. Tucker and Gaillard bring a multiracial perspective and years of political reporting to bear on a critical moment in American history, a time of racial reckoning and democracy under siege.

"The hard questions facing us as Americans are at the heart of this book by two of the most provocative Southern writers of our time: What will we do about race and how do we begin to heal our raw political divide? Cynthia Tucker and Frye Gaillard trace the developments that have driven us to today and insist we have an honest look in the mirror, and a healthy debate, to save us from this current destructive path." — Judy Woodruff, anchor and managing editor of PBS NewsHour

Frye Gaillard is an award-winning journalist with over 30 published works on Southern history and culture, including Watermelon Wine; Cradle of Freedom: Alabama and the Movement that Changed America; The Books That Mattered: A Reader's Memoir; Journey to the Wilderness: War, Memory, and a Southern Family's Civil War Letters; Go South to Freedom; A Hard Rain: America in the 1960s, Our Decade of Hope, Possibility, and Innocence Lost; and The Slave Who Went to Congress. A Hard Rain was selected as one of NPR's Best Books of 2018. Writer-in-residence at the University of South Alabama, he is also John Egerton Scholar in Residence at the Southern Foodways Alliance at the University of Mississippi. He is the winner of the Clarence Cason Award for Nonfiction Writing, the Lillian Smith Book Award, and the Eugene Current-Garcia Award For Distinction in Literary Scholarship. In 2019, Gaillard was awarded the Alabama Governor's Arts Award for his contributions to literature.

Cynthia Tucker is a Pulitzer Prize-winning syndicated columnist who has spent most of her career in journalism, having previously worked for the Atlanta Journal-Constitution as an editorial page editor and as a Washington-based political columnist. She has also been featured as a political commentator on television and radio. Tucker's work as a journalist has been celebrated by the National Association of Black Journalists (who inducted her into its hall of fame), Harvard University, and the Alabama Humanities Foundation. She spent three years as a visiting professor at the University of Georgia's Grady College of Journalism and is currently the journalist-in-residence at the University of South Alabama.

The Southernization of America: A Story of Democracy in the Balance (Hardcover)

A beautifully written yet searing meditation on American democracy. This brilliant and compelling book makes clear that the greatest threat to democracy is America's eternal pandemic—racism. — Ty Seidule, author of Robert E. Lee and Me: A Southerner’s Reckoning with the Myth of the Lost Cause