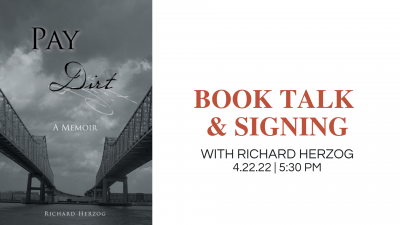 Join us as we welcome Richard Herzog to Ernest & Hadley Books as he introduces and discusses his memoir: Pay Dirt.

"I will always love you. I will never leave you..."

Richard Herzog heard those sweet words from his high school teacher just three months after his sixteenth birthday. Love and security were two missing pieces of his childhood, and Richard wanted and needed them more than anything. But those words would haunt him for nearly forty years.

Raised in the "City that Care Forgot," and in an environment which taught less than it cared, Richard spent his formative years helping and supporting others-friends, neighbors, and an English teacher.

After a student placed a condom box on the teacher's desk, Richard felt compelled to help her. He was an ordinary freshman attempting an extraordinary feat, but she was no ordinary person. A former college homecoming queen, she was smart, beautiful, and had a passion for literature-and one student. She had taken her marriage vows, her degree, and her knowledge to an all-male Catholic school located one mile south of the Mississippi River, where the Big Muddy runs west until it bends north into the setting sun.

What began as platonic progressed into a period in which she weaved him into a web of sex, lies, and broken promises. After she had ended the relationship, Richard spiraled down a destructive path, until he crossed the bridge onto the road of twelve-step recovery.

Richard Herzog was born in New Orleans, the City that Care Forgot, and in an environment that taught less than it cared. He holds a BS from the University of Mississippi with a minor in English. Richard also has a Master's Degree in Health Promotion from Vanderbilt University. He spent four years in the Air National Guard, twenty-seven years in education, and thirty-one years coaching football, four as a graduate assistant in the SEC.

Signed copies are available in hardcover and paperback!

We are currently accepting used books for store credit from Team Hadley and Friends & Family members. Please keep your drop offs limited to under 20 books at a time. Thank you!