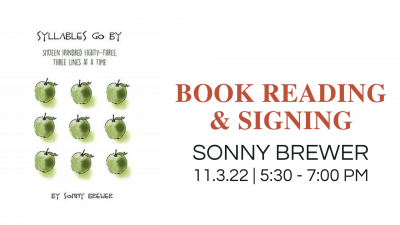 Join Ernest & Hadley Booksellers as we welcome Sonny Brewer, author of The Poet of Tolstoy Park and other novels, on Thursday, November 3 at 5:30 PM for an evening to remember!

In his latest book Syllables Go By: Sixteen Hundred Eighty-Three, Three Lines at a Time, Sonny Brewer turns his hand to a unique book of prose and poetry, side-by-side, with a narrative raison d'etre on one page, and a haiku on the facing page. Imagine an artist who paints a canvas, then turns it over, and on the back, writes a description of the time and place and circumstances that inspired the painting. That's what the author has done with each of ninety-nine numbered haiku in this inspirational book. He tells the reader just what was going on, what he was thinking about, what he saw or heard that caused him to express the moment in a haiku of three lines and seventeen syllables. Asks the author, "What if the donkey Christ rode into Jerusalem was aware that his rider was going to meet his fate, and was saddened in the manner of a pet that loses its human friend?" Find the answer in haiku number two.

Sonny Brewer is the author of the novels The Poet of Tolstoy Park and three others. He is the editor of the five-volume Stories from the Blue Moon Cafe anthology series, and editor of Don't Quit Your Day Job anthology. He is the founder of the Fairhope Center for Writing Arts, and former bookseller at his Over the Transom Bookstore. In his early writing career he was a journalist and reporter and the editor of the Mobile, Alabama city-regional magazine, Mobile Bay Monthly. He wrote a children's book, Rembrandt the Rocker; a book about lawyer Clarence Darrow; and, a self-help book called A Yin for Change. He was editor-in-chief for MacAdam/Cage Publishing in San Francisco. Sonny lives in Fairhope, Alabama, with his dog Bobby (also making an appearance!)

We are accepting used books for store credit!