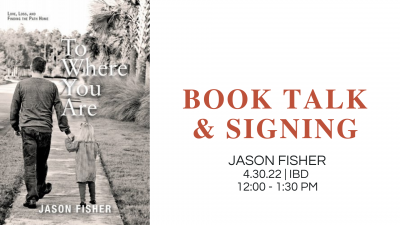 Join us on Indie Bookstore Day as we welcome former congressional special election candidate (D, AL), Jason Fisher, to Ernest & Hadley Books! Mr. Fisher will read from his memoir To Where You Are -

Consumed by heartache following his wife's unexpected death after just five years of marriage, Jason Fisher navigates a tumultuous journey as he adapts to a world he never imagined facing. He must now learn to balance the loss of his soulmate with his new life as a young, single, widowed father of a daughter with a rare disability. Jason's trauma causes setbacks and he experiences moments of painful loneliness while raising a nonverbal child. Fisher perseveres through years of grieving and ultimately discovers that the path home lies in embracing the moment, listening to his heart, and living out his true passions, including an improbable run for the United States Senate in one of modern history's most watched races. To Where You Are is a moving memoir by debut author Jason Fisher, who details his story of discovering unconditional love, dealing with grief and trauma following unforeseen tragedies, and forging a new path forward.

Jason Fisher is a nonprofit executive, a passionate community advocate, and a proud father to his daughter, Mackenzie, who has a rare chromosomal disorder and accompanying disabilities. He was married to his wife, Mandi, for nearly six years before she passed away unexpectedly at the age of thirty. A native of Iowa, Jason attended Coe College in Cedar Rapids where he received his bachelor's degree with a double major in business administration and political science. He also holds a master's degree in public service from the Clinton School at the University of Arkansas, as well as a second bachelor's degree in geosciences from Mississippi State University. Jason loves to write, stays involved in current events, enjoys athletics, and relentlessly pursues new adventures. Today, Jason and Mackenzie reside in Fairhope, Alabama-just a stone's throw from the Gulf Coast city of Mobile, his late wife's hometown where the couple married in 2006.

Available in hardcover or paperback

To Where You Are: Love, Loss, and Finding the Path Home (Hardcover)

We are currently not accepting used books for our Annex until late August. Stay tuned for updates!