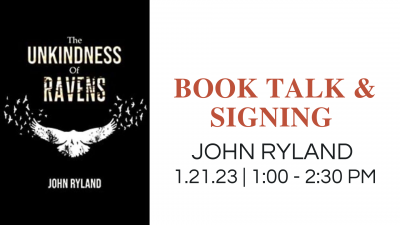 Join us on Saturday, January 21 from 1:00-2:30 PM as we welcome John Ryland to Ernest & Hadley Books, where he will read from and discuss his two latest releases: The Reality of Dreams and The Unkindness of Ravens.

John Ryland is an author with a unique southern flare wrought from his humble beginnings in rural Alabama. His natural, unencumbered prose and shadowy southern style have made him a fan favorite. His work has been referred to as “in the vein of M. Night Shyamalan and Alfred Hitchcock.” It's worth noting that there is a 17th-century Baptist minister by the same name, long gone, who will thankfully not be reading at this event (RIP).

John has had a few single pieces of poetry published throughout the years and currently has a chapbook entitled: The Stranger-poems from the chair. His debut novel Soul's Harbor was released in January of 2020, just in time for the pandemic. A collection of dark, quirky short stories entitled Southern Gothic was released in October 2020 and features the artwork of the talented Novyl Saeed. He also has a young adult dark romance entitled Shatter. He is very excited about his latest novels, Peripheral - a paranormal suspense thriller, and The Man with No Eyes - an action suspense thriller. His novella The Reality of Dreams was released on Oct 17, 2022, followed by The Unkindness of Ravens on Dec 19, 2022.

John lives in Northport where he enjoys writing poetry, short stories, and longer works. When he's not writing, he likes to spend time with his wife and two rambunctious sons. He enjoys gardening - the simplicity of nature is calming, reading, and taking naps - which he rarely gets to do because of a full-time job and the aforementioned boys.

The Unkindness of Ravens