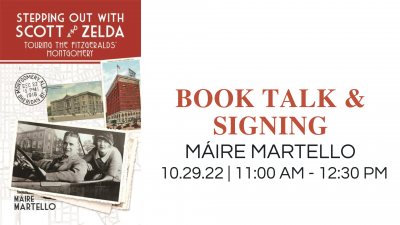 Join us on Saturday, October 29 from 11:00 AM - 12:30 PM as we welcome Máire Martello to Ernest & Hadley Booksellers, celebrating her historical travel guide, Stepping Out with Scott & Zelda: A Tour Through the Fitzgeralds' Montgomery. Enjoy tea and refreshments - 1920's costumes are encouraged!

At various periods in their lives, F. Scott and Zelda Fitzgerald called Montgomery, Alabama their home. With Stepping Out with Scott and Zelda, you have a handy guide for touring the city and seeing the sights that the Fitzgeralds' would have enjoyed from day to day. Ranging from an old Confederate cemetery to a swanky country club, the Fitzgeralds' Montgomery is sure to enchant both visitors and natives alike.

Stroll back in time with Stepping Out with Scott and Zelda, a tour and travel guide that reveals the places and people that made up the Fitzgeralds' lives during their time in Montgomery. Visit Zelda's childhood home in the quaint Cottage Hill neighborhood, with its ornate Victorian mansions and charming houses with gingerbread trim. See where Scott, as a lieutenant during World War I, first saw this Southern city and would change his live forever in meeting a young woman at a country-club dance. Explore historic Old Cloverdale's winding tree-lined streets and enjoy their 1931 rental home, now an important literary museum. Featuring photographs and period postcards from the era, Stepping Out with Scott and Zelda is the perfect way to ring in the new Roaring Twenties.

MÁIRE MARTELLO is the docent and a board member for the F. Scott and Zelda Fitzgerald Museum in Montgomery, Alabama. Beyond that role, she is also a playwright, fiction writer, and contributor to the medieval history blog The Murrey and Blue. Her recent short stories about Richard the Third, including "Becoming White Surrey," were published on behalf of the Scoliosis Association UK. Her play The Lodger was produced off-Broadway, where it garnered good reviews. As a member of The Players, the oldest theatrical club in America, she produced a long-running series of evenings devoted to literature and culture. Guest speakers included Oliver Sacks, Quentin Crisp, Fran Lebowitz, Camille Paglia, Susan Sontag, Dominick Dunne, Joyce Maynard, and Eric Bentley. A long-time admirer of the writings of F. Scott Fitzgerald, she produced an evening at The Players celebrating his centennial. Speakers included Budd Schulberg, Ring Lardner Jr., Matt Bruccoli, and Ruth Prigozy. A graduate of Finch College in New York City, she relocated from that city to Montgomery in the fall of 2018.'

"Stepping Out with Scott and Zelda is a fascinating little guide that reveals the places, extant and vanished, that were part of the Fitzeralds' Montgomery experience. Great fun!" --John Anthony Gilvey, author of Before the Parade Passes By: Gower Champion and the Glorious American Musical

"Máire Martello's magic is in tying the F. Scott and Zelda Fitzgerald literature to actual Montgomery locations. In her hands, our capital city becomes a literary destination that fires the imagination." --Patricia Clark, executive director of the Montgomery County Historical Society

Stepping Out with Scott & Zelda: A Tour Through the Fitzgeralds' Montgomery (Paperback)

We are accepting used books for store credit!