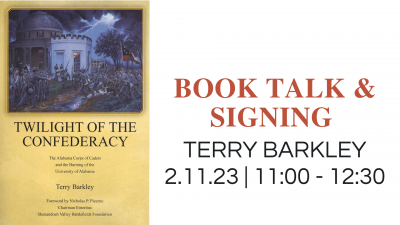 Calling all local Civil War enthusiasts! Join us on Saturday, February 11 from 11:00 AM to 12:30 PM as we welcome Terry Barkley to Ernest & Hadley Booksellers, where he will discuss and sign his latest book: Twilight of the Confederacy: The Alabama Corps of Cadets and the Burning of The University of Alabama.

In the waning days of the Civil War, the Union leadership decided to inflict one final blow on the Confederacy to end hostilities. Accordingly, Major General James H. Wilson and his veteran Cavalry Corps were ordered to seize and destroy the Deep South agricultural and industrial capabilities in the largely untouched regions of central Alabama and western Georgia. The Confederate industrial centers at Selma, Alabama, and Columbus, Georgia, were prime targets of the raid.

Culling the best material from the available archival, primary, and secondary sources, author Terry Barkley presents a sensitive but balanced portrayal of the Civil War service of the ACC in Twilight of the Confederacy: The Alabama Corps of Cadets and the Burning of the University of Alabama. These young men (many teenagers) faithfully served their university, the State of Alabama, and the Confederacy, even unto death.

Terry Barkley retired in 2012 as director of the Brethren Historical Library and Archives (BHLA) at the Church of the Brethren General Offices in Elgin, Illinois. That year, under the auspices of the Brethren Historical Committee, Barkley delivered the 150th anniversary commemorative lecture on the Dunker Church of Antietam Battlefield at Annual Conference of the Church of the Brethren in St. Louis. He previously served as archivist and museum curator at Bridgewater College in Virginia, a Brethren-related institution, and holds a bachelor's degree and graduate degrees from the University of North Alabama, The Citadel, The University of Alabama, and Harvard University. Terry is an independent scholar who lives in Tuscaloosa, Alabama, and is the author or co-author of six books.

Twilight of the Confederacy