For Jerusalem's Sake: I Will Not Rest 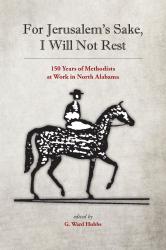 Sponsored by the North Alabama Conference of the United Methodist Church, 2020

For Jerusalem’s Sake, I Will Not Rest is a unique portrait of believers living their faith by working to help those coping with wrenching social changes.

Perhaps more than anywhere else in the country, north Alabama after the Civil War was being torn apart. Just as a newly freed people were taking control of their own lives, Ku Klux Klansmen stepped in to terrorize them. War orphans were left with nowhere to go. Great cities grew up in once-plowed fields. Poor immigrants who barely spoke English came to work in the dark mines and blazing iron furnaces that drove those cities. New ideas about evolution and the role of women threatened comfortable traditions. Such problems continued well into the twentieth century, perhaps culminating when north Alabama took center stage during the civil rights movement.

For Jerusalem’s Sake looks at the way Methodists during the past 150 years have addressed those and other challenges. This smoothly flowing narrative is built as a series of chapters written by leading scholars. Two chapters examine the origins of north Alabama’s diﬀerent strains of Methodism, both black and white. Others are devoted to the Methodist Children’s Home and to a mission in Ensley’s Italian district. War-time letters from Sunday School class members are reprinted between the boys sent overseas and the girls left behind. But don’t be misled, For Jerusalem’s Sake is no exercise in self-congratulations. The Methodists in north Alabama did not always choose the right paths, and this book’s contributors do not flinch from discussing those painful times. Nonetheless, this is still a remarkably impressive story.

In short, For Jerusalem’s Sake has a well-chosen subtitle—150 Years of Methodists at Work in North Alabama. For indeed, they have been a busy lot.